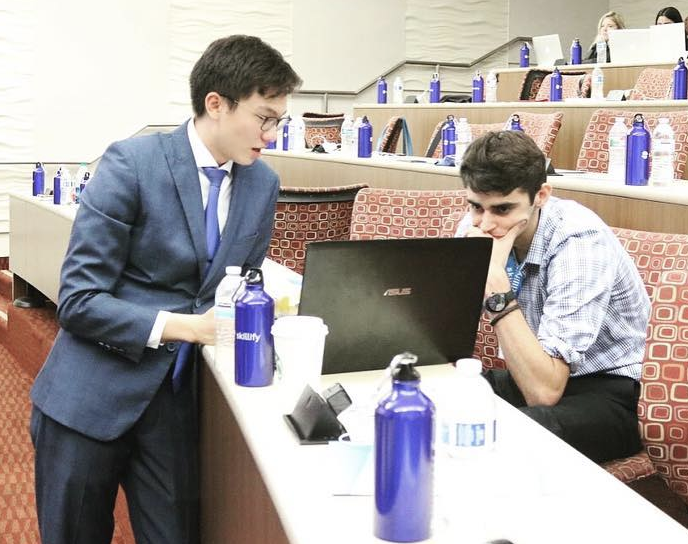 20 Feb What Role Models do our Students Need?

Posted at 22:56h in Uncategorized by shireen 0 Comments
0 Likes
Share

I spend most of my time working with students, so I was excited to spend the first half of last week at a conference with only adults.

Within eight hours however, I felt drained.

Everyone shares their frustration with kids being disrespectful, inconsiderate, and insensitive. I work with schools daily to discuss how we can provide role models to help students become better communicators, networkers, and overall more kind and aware beings. But after spending just a few hours with adults, I noticed that many of them struggled with the same behaviors that we complain about seeing in our kids.

Role Models #1: We want our students to be respectful.

On Tuesday morning, four administrators drove two hours to deliver a 90 minute presentation. You could see they had prepared, and put effort into helping fellow educators. I sat at a table of six. Three were from the same district, and talked during the entirety of the presentation. They didn’t agree with any of the points being made in the presentation. During the Q/A, one of the three asked a question. After receiving an answer, and as soon as the speaker moved on to the next question, they snarked, “Not in a million years. They’re living in a fantasy world.”

It is so frustrating to see this behavior in our classrooms from our students. We prepare day and night, countless lesson plans and teaching strategies, and it’s infuriating (and very hurtful) when our students disrespect us for this work. And not only does this behavior hurt the teacher, it hurts the learning of the entire classroom. I’ve felt this frustration, and I know thousands of educators have as well.

So why is it that I saw the same type of disrespect at a conference full of educators?

We talk about serving as role models for students to learn how to deliver constructive feedback and communicate openly, yet I attended session after session, and saw adults disrespect presenters, the majority of which were fellow educators.

How can we expect to help students overcome toxic habits when we still practice them?

Role Models #2: We want our students to be considerate.

Monday morning of the conference began with a bus ride to a school site. A fellow conference attendee came on board – he seemed to know people on the bus – they cheered when he arrived. He took the seat next to me. His colleagues were seated across our row. He stepped on my foot, and quickly apologized. Before I could say anything, he had his back to me, and spent the entirety of the bus ride speaking to his colleagues.

I later found out that he is an Assistant Principal.

I couldn’t believe it.

In schools, we talk about administrators being role models for importance of consideration, inclusion, first impressions, etc. But here was a leader, completely unaware and inconsiderate of the person next to him.

Role Models #3: We want our students to see value in learning from others.

I am very interested in learning about professional (and personal) journeys. I work with students who want many different jobs and I cannot help them learn how to build a path if I am unaware of what’s out there. So whenever I meet someone, I make sure to learn about their background.

I spent a six hour day with forty other attendees. I personally got to speak with eighteen of them. We had conversations, discussed opinions on education policy and program implementations. I knew what they did, where they worked, how they got involved in the field. Of those eighteen, only two actually asked me about me…

The main lesson I teach students during our Skillify Networking workshops is to take genuine interest in people. In order to build a meaningful relationship, you must get to know the person, not just what they do or have to offer. I published a post last week that advised recent grads against asking for introductions and internships without taking a minute to get to know the person they were asking the favor from. 24 hours later, I was reminded that this advice applied to many adults as well.

Role Models #4: We want our students to be kind.

In one of the classrooms we visited, the students were working on their Money Management projects (they were so great!). I watched their teacher go around the classroom, checking to make sure everyone was presenting their projects in their small groups. After five minutes, she arrived at the last table.

“I need you guys to focus and present your projects,” she said.

“We just did,” responded the students.

“No you didn’t,” she retorted, in a very aggressive tone.

The students looked at each other confused. “We just did….” they said.

“No… it took us about five minutes. We just finished.”

This incident made me very upset. I work with students too, so I know sometimes we don’t always get the truth from some. But it is never okay to automatically assume a student is lying. There are so many ways to handle this situation and verify that the presentations happened. Simply asking, “Cool, what did the other team share?” could have helped you get validation. Instead, the teacher responded in a manner that was so unkind and insensitive. How can we expect our students to believe in themselves and be kind to each other when they see role models assume the worst in them and their peers?

Yes, there are many incredible educators out there, several of which I got to interact with during last week’s conference. I see what these educators do for students and their schools, and it is unfortunate that our education system as a whole is inhibiting the true impact of their work.

That said, as adults, we forget the impact daily habits can have on our ability to serve as the best role model for our students. I saw this poster (right) in one of the classrooms we visited last week.

This is to remind us, all of us, to reflect and validate that we are practicing what we preach, and serving as strong role models.